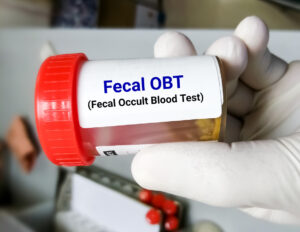 Colon cancer screening can save lives, especially because it ranks third among the most commonly diagnosed malignancies. A typical approach to check for colon cancer is to confirm if there is bleeding within the intestines. However, stool can contain significant amounts of blood without showing visible signs.

Why Do You Need A Fecal Occult Blood Test?

The digestive tract releases minute amounts of blood despite perfect health. A few milliliters of blood loss is not a cause for concern, but cancer and other gastrointestinal conditions can cause significant bleeding.

Patients may not have outward symptoms of bleeding, such as anemia. That’s why it may not be obvious that someone has an actively bleeding tumor. Early detection of cancer signs is crucial for maximizing survival, so accurately detecting stool blood improves screening.

Unfortunately, the usual stool’s color and shape can make it difficult to spot bleeding. Instead of a visual inspection, a fecal occult blood test looks for the biochemical properties of blood.

As a non-invasive procedure, occult blood testing provides an easy way to detect early signs of cancer. A positive result may warrant more intensive diagnostic procedures such as a colonoscopy.

People with risk factors, like a family history of cancer, should ask their provider if they need more frequent screenings.

Aside from cancer, a fecal occult blood test may assist in diagnosing other digestive tract illnesses. This includes inflammatory bowel disease, which causes bleeding.

There are two standard approaches for occult blood testing:

How Do You Prepare?

Before taking the test, disclose any medications or supplements you take to your doctor. You may have to temporarily stop some of them depending on your doctor’s advice.

It’s also important to align expectations. Note that a fecal occult blood test will always have some inaccuracy. That’s why it’s essential to coordinate with your doctor to correlate any other symptoms.

If you get a positive result, you might have to undergo additional testing to assess your colon health better.

Detecting blood in the stool may seem straightforward, but it offers a crucial opportunity for early detection of colorectal cancer. A fecal occult blood test is a quick and non-invasive method for checking your gastrointestinal health. Patients can choose the best option for their situation with guaiac and antibody tests for occult blood. Working with an experienced digestive care center can help you reach optimal health.

With many facilities spread across California, inSite Digestive Health Care provides patients with state-of-the-art health care services. Our diagnostic and treatment modalities address numerous gastrointestinal and liver illnesses. Call us or fill out our online appointment request form to book an appointment with a GI doctor near you.

We look forward to serving you!