Microscopic colitis has two main forms: collagenous colitis and lymphocytic colitis. In both forms, an increase in white blood cells can be seen within the intestinal inner lining and the symptoms of both and treatment for both are identical. Most researchers believe that the two are variations of the same disorder. With collagenous colitis, the normal very thin layer of collagen beneath the lining appears thicker than normal. Collagen is a structural protein in bones and cartilage and in the intestines; collagen anchors the intestinal lining to underlying layers of tissue. The thicker collagen layer seen with collagenous colitis may result from inflammation. With Lymphocytic Colitis, a type of white blood cells called lymphocytes, are increased in the intestinal lining.

Some people get microscopic colitis after being sick with certain harmful bacteria, including Yersinia enterocolitica, Campylobacter jejuni, and Clostridium difficile. Other people test negative for these and other harmful bacteria, but their condition improves with antibiotic treatment, suggesting normally harmless bacteria in the colon may trigger microscopic colitis in some people.

No medications have been proven to cause microscopic colitis but several have been linked to it, and if in doubt we stop these to see if that clears up the problem; these include:

Certain foods appear to trigger microscopic colitis in some people. Although no specific foods have been identified, following a caffeine- or lactose free diet sometimes improves symptoms.

Chronic very watery but non-bloody diarrhea is the main symptom of microscopic colitis. Episodes of diarrhea can last for weeks, months, or years. Most cases are interrupted by similarly long periods of remission—times when diarrhea goes away.

Scientists believe diarrhea associated with microscopic colitis is caused by the intestinal lining’s reduced ability to absorb electrolytes—salts and minerals in the body. The resulting electrolyte imbalance decreases the colon’s ability to absorb fluid and increases fluid secretion into the colon.

Other common symptoms of microscopic colitis include abdominal cramps or pain, usually less bothersome than the urgency of bowel movement or abdominal bloating.

Microscopic colitis can only be diagnosed by examining intestinal tissue removed during colonoscopy or flexible sigmoidoscopy—procedures that use a lighted, flexible scope to see inside the colon and rectum. Before colonoscopy or flexible sigmoidoscopy, the doctor will rule out other conditions that cause diarrhea by asking questions about symptoms and performing tests on blood and stool to look for signs of infection or other causes of diarrhea.

During a colonoscopy, the doctor can rule out even more conditions by looking at the lining of the colon. If the colon lining appears normal, the doctor may suspect microscopic colitis and will remove small biopsy samples of tissue using a tool passed through the scope. Because inflammation from microscopic colitis can occur in patches, the doctors will biopsy several areas of the colon. After the tissue has been collected, a pathologist—a doctor trained to diagnose diseases based on tissue appearance—examines the tissue with a microscope.

Antidiarrheal medications such as bismuth subsalicylate (Pepto-Bismol) and loperamide (Immodium) are effective for some patients but used in higher than typical “bottle label” doses. For example, we’ll have patients with mild cases use loperamide 1-3 caplets before meals and bedtime, and take bismuth 2 tablespoons or tablets after meals and bedtime for up to a few weeks at a time and taper down doses when symptoms are better. The bismuth seems to help relieve the inflammation and symptoms may stay cleared up then without treatment for considerable periods. Diphenoxylate (Lomotil), can also be recommended.

Medications known as corticosteroids may help, including prednisone (rarely) and budesonide (Entocort). Corticosteroids have many potential side effects including insomnia, fluid retention, and mood swings. Budesonide has much fewer side effects than other corticosteroids because very little of it is absorbed, and it often works very quickly and completely to treat flare-ups of microscopic colitis. Some people are totally controlled within a couple of days.

Other medications sometimes used to treat microscopic colitis include mesalamine and cholestyramine (Questran), though these are often not very helpful, Any medication used is tapered off once good control of the condition occurs.

People with microscopic colitis generally achieve complete relief through treatment, although relapses can occur. Some patients require long-term therapy because they experience a prompt relapse when treatment is stopped. Unlike other forms of IBD, microscopic colitis usually has no complications. It doesn’t appear to change into other forms of IBD and does not have any extra risk of colon cancer. Budesonide can have complications with high dose long-term use, so clinicians should always supervise treatment.

Changes to your diet may help relieve diarrhea that you experience with microscopic colitis. Try to:

Drink plenty of fluids. Water is best, but fluids with added sodium and potassium (electrolytes) may help as well. DO NOT STOP FLUIDS HOPING DIARRHEA WILL STOP.

Choose soft, easy-to-digest foods. These include applesauce, bananas, and rice. Avoid high-fiber foods such as beans, nuts, and raw vegetables. If you feel as though your symptoms are improving, slowly add high-fiber foods back to your diet. DO NOT STOP EATING HOPING DIARRHEA WILL STOP.

Eat several small meals rather than a few large meals. Spacing meals throughout the day may ease diarrhea.

Avoid irritating foods. Stay away from spicy, fatty or fried foods and any other foods that make your symptoms worse. 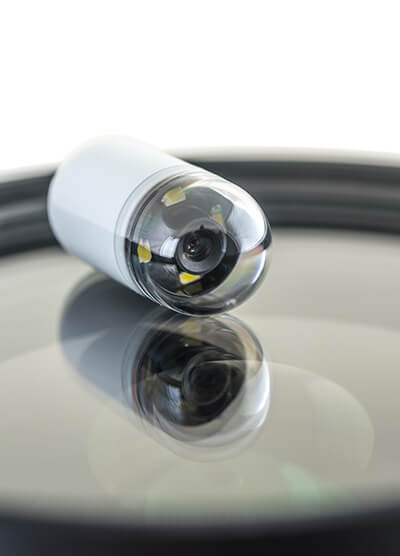