Non-Ulcer Dyspepsia, also known as functional dyspepsia, is best described as having symptoms of indigestion and pain similar to that of an ulcer – but with no sign of damage to the esophagus, stomach, or other GI organs. Individuals with NUD may suffer from long-lasting episodes of upper abdominal indigestion characterized by discomfort, pain, nausea, bloating, and heartburn. There is currently no obvious cause for symptoms of NUD, and as much as 20% of the population may have some degree of dyspepsia.

While there is no known cause for NUD, experts have come up with a few theories for possible causes. For one, digestion occurs by a coordination of contractions (peristalsis) and activities that are controlled by various nerves, hormones, and other mediators in each area of the GI tract. Irritants to any of these control mechanisms might contribute to NUD symptoms.

Another possible cause is the improper function of the muscles in the stomach wall. Sometimes the nerves in the lining of the stomach are unusually sensitive to chemicals in food, and send signals to the brain that can induce queasiness, heaviness, burning or pain. Abnormal peristalsis can occur if there is a change in one’s eating habits (too often, too fast etc.), or if a person is under stress. NUD might also be a consequence of a prior “stomach flu” or “food poisoning” episode that occurred years before. After such bouts, 5-10% of people who previously did not suffer from indigestion, now have some sensitive stomach symptoms which qualify as NUD.

Other possible risk factors include genetic predisposition and stress.

Symptoms are often variable and intermittent. Common patterns include:

Your physician can help determine possible triggers for non-ulcer dyspepsia by reviewing your symptoms, lab tests, lifestyle, diet and eating habits, and past and current medications. A limited physical checkup and simple lab tests often allow a very accurate diagnosis. Tests ordered will vary depending on the cause of NUD. NUD is often a diagnosis of exclusion. For example, we will test for and treat (if positive) a bacterial form of gastritis resulting from H. pylori Infection. The physician will sometimes order an ultrasound scan if a patient shows signs or symptoms of gallbladder disease, or an endoscopy if the patient has signs of ulcers or severe inflammation of the stomach. Upper GI endoscopy is a test we commonly do for unexplained indigestion or where we suspect a serious cause.

Treatment will depend on the cause and severity of symptoms. For example, in cases of GERD (Gastroesophageal Reflux Disease) related indigestion or gastritis brought on by H. Pylori, treatments will be primarily focused on symptom relief from these disorders. The goals of NUD treatment are to alleviate present symptoms, restore normal function, and prevent future symptoms.

You can make changes to your lifestyle to help relieve symptoms of dyspepsia. Below are some tips on how to relieve NUD:

Use medications exactly as directed

Medication may not work OR may cause you other problems if not taken properly.

For this condition, medicines are not usually needed longterm, just for flare-ups.

It's best to eat several small meals instead of two or three large meals.After you eat, wait for 2 to 3 hours before you lie down. Late-night snacks aren't a good idea.

Do not smoke or chew tobacco or vape. If you use marijuana at all, be sure to discuss with your clinician.

Rest or relax more. Stress management is a key for MOST people with NUD.

Think about and start doing things that help you manage stress better. But when you lie down, keep your head higher than your feet, or use a recliner chair if available, in case you do have some reflux (GERD) tendency.

Do not wear tight clothing around your middle area. 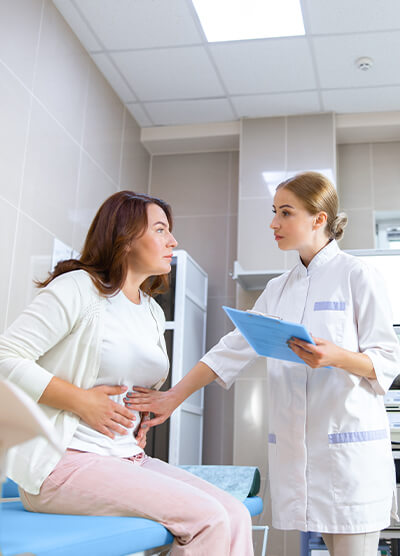